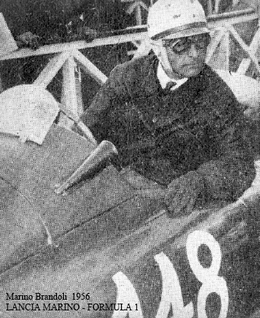 Marino Brandoli was born in Modena (Italy)  in 1908 and as a child was attracted to the world of engines , the speed and the mystery of mechanics. The passion is such that at the age of 14 years he attended a course (in Bologna) to obtain a license for steam boilers to enable him to operate in the locomotive industry.  He spent much of is time at railway stations and in the countryside where the trains passed at full speed; the drivers took care of their "beasts" the engineers used to bet  from station to station their best time. Marino obtained  the driver's license, to operate the modern combine harvester which Marino’s family had purchased from the so distant United States.

After a few years, having demonstrated his wild passion for engines and mechanics. The well - known Italian Maserati brothers were so impressed by Marino that they employed him in the   testing department. From there Marino acquired a vast knowledge racing engines and mechanics.During this period Marino to part in motorcycle racing with good results.

Marino improved his experience through motorcycle racing competitions developing And modifyng  the mechanics of  suspensions and engine components. Marino was promoted to the "Maserati racing team" which then became the property of the  “Orsi family “ and there Marino came into contact with the best design makers and the most famous of drivers. Enzo Ferrari” called Marino to work side by side for the preparation introducing  the  rudimental techniques for streamlining the procedures for racing competitions: the testing of engines on the field before the competitions, this included also the assistance for the drivers during the races. Marino passed onto  "Auto Union" where he gave his wide experience and knowledge for breaking records in speed. The application of modern alloys which replace steel, aerodynamic knowledge attracted Marino’s attention, he realised how important these were important to improve the  performance and resistance and to reduce  the weight of vehicles.

When Alfa Romeo had withdrawn from car racing some cars were sent to Ferrari   and some were purchased  by "Scuderia Subalpina" co-founded with Conte Della Chiesa  and Barone Mazzonis.

The continuous technical improvements to vehicles, more efficient organization on the motor racing track, the use of synergies and trade-offs arising from the interaction between drivers, cars, motor racing track, permit (private) good results, run by young and impetuous drivers on circuits across Europe. Marino  in 1939 moved to Turin where he began a series of collaborations with Fiat to develop both the sports cars end the military technological innovation. During the war Marino  developed systems for the production of "gas" obtained from the charcoal: the so-called "gasogeni". At the workshop in corso Peschiera (Turin) he assembles and edits to testing and preparing vehicles for commercial distribution. Marino organizes the distribution in northern and central Italy. Immediately after the war he worked in the developing of the 1100 Sport built at “Fiat Lingotto” and participates in numerous competitions including the 1946 “Millemiglia” with Luigi Della Chiesa. Marino collaborates with the Cisitalia and with the designer Dante Giacosa to develop the first system-clutch  mechanical  preselection gearbox and participates in countless races with the single-seater car. In a few months he makes a single-seater car with mechanical parts derived from Fiat’s car with the Maserati 1500 engine - without compressor - to meet the regulations on the displacements) and participates in various racing circuits. The “FIAT MASERATI MARINO” is driven, with considerable success, even by his friend Bracco. In the same year 1946 Marino creates the "TESTA MARINO" which is designed for both ”Turismo” and SPORT CORSA and they were sold as a kit (with a manifold, carburetor and exhaust manifold) to the most important preparatory Italian and distributed systems on the market in more than 5.000 units -  it  was given the nickname "Testa delle Vittorie" for  the 1947-1948-1949 seasons. Marino also collaborates in the development of the project “Fiat Turbina “ sees the light with the completion of the session in early 1954.

In 1950 he produces the “Fiat Berlinetta Marino” with 750 cc engine and in 1951  with 1100 cc. Marino along with some technicians uses all the experience gained over the years, such as applying principles of "ground effect" that allows the achievement of performance suspension, results in exceptional cornering grip and speed. From 750 cc engine derived from the base 1100 cc Fiat excellent results are obtained with safety schemes 7800/8200 rpm. From the frame (in molybdenum tubes from aeronautics) is designed with the principles of obtaining the progressive deformation (Marino saves himself, after going off  road, he was able to control the car by going against a mountain with the speed of 130 km / h). In 1953 he builds the "Barchetta" and for the design calls   his friend Giovanni Michelotti with the aim to market a small number of sports cars. Surprising results for the overall features the car won so first place in the first race of the "Aosta Gran San Bernardo".

A device for the application engineer adopted by Marino the vehicle (subsequently replaced by the third butterfly vacuum to the carburetor - see Giulietta Spyder - was to bring the mouth of  air inlet to the carburetor to the hand of the driver: by manually adjusting the valve by hand diffuser (with the variation of the altitude is necessary to vary the flow of intake air as not to reduce the numbers of evolutions of the engine) to adjust, through the ear sharp and sensitive of the pilot, the number of evolutions by minimizing the loss of power. In normal conditions of an uphill race power loss in those conditions can reach the order of 40%.

With Dante Giacosa and Lucio Rapi Marino participates in the development of the project and the testing of the "Fiat 8 V" which took part in several races. Towards the end of summer 1953 Marino has the idea  to develop two projects : for Formula 1 and Sports Cars. With some friends and collaborators, After the years Marino puts together all his ideas and experience of various projects many of them not mentioned (see page 2). The mission profile was basically defined as follows: build two cars with parts and components unified taking into account the differences of the two models, design with ability to produce in limited series, the possibility of updates (ex: change of type of engine), use materials fit and lighterweight, achieving a robust chassis designed to improve driver safety . (at that time, the linguistic terms and applications were not known, today.
With the use of components (e.g bearings, seals,o-rings )  from the market or access to parts of the production car (after having verified the worthyness) in order to reduce design time, as well as to optimize acquisition costs including subsequent replacement used engines manufacturing base but with suitable characteristics for their evolution or transformation, of limited cost, robust and low maintenance for their interchangeability or substitution.The differential, gearbox and clutch had to be withdrawn from the market and made fit for use. For brakes had during the transition to the disk type but not yet adequately tested, for which it was provided to project the possibility to be applied subsequently (in particular in front). In regard to the suspension, although having been defined the general characteristics was left free will as long as they allow the cars to obtain the maximum reliability, and ease of handling capacity of adaptability to various different paths.

Marino knew famous designers such as Iano, Fessia De Virgilio etc. of which he had great esteem and who were collaborating with “Lancia”. In” Marino team together with his cars he raced with several  others such as B.20 which admired  he decided to adopt the basic mechanics of knowing that the engine power in relation to competitiveness and development which presented itself was a weak point but he counted on getting the same engine of the Lancia D24. The decision to retire from racing by "Gianni Lancia and its board of directors" was not allowed to get the engines and all efforts were useless (They  had seen the crushing of those in stock ).
The choice of the designer is with the talented Giovanni  Michelotti quickly realized that the project taking into account the possibility of adaptation of the mechanical changes, than accumulated over the years on issues aerodynamics, creating lines that will be attractive at the same time aggressive, elegant and worthy  for use. In 1954 are designed and implemented the "Lancia Marino" and participate in the spring of the following races ran uphill, put themselves on the national circuit for the design and manufacturing skills. The cars run for two years. At the end of 1957 Marino Brandoli decides  to retire from the sport and began working with a number of Italian and international companies that develop their own innovation activities also in the automotive industry and the year 1958 he founded a company with the mission to design and produce components for automotive safety.

© Lancia Marino - www.lanciamarino.it - This email address is being protected from spambots. You need JavaScript enabled to view it.